Consumers Want Sincere Activism in Your Cause Marketing Campaigns

In 2017, Pepsi launched a ‘Live for Now-Moments’ campaign which included an ad that was targeting millennials “to project a global message of unity, peace, and understanding.” Featuring Kendall Jenner, and a wide range of hired actors, this ad lit a fire within consumers as they started holding brands accountable who were inauthentic with their messaging and seemed to be only looking for a cash grab. Many responses to the ad were sarcastic and annoyed at the brand:

Pepsi ultimately pulled the ad and put out a statement apologizing for missing the mark. It’s been reported this cost the brand anywhere from $2-5 million. 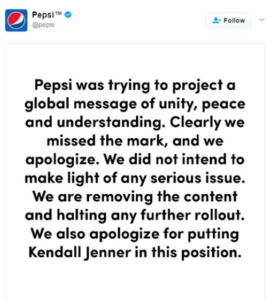 Pepsi had tried to employ a tactic called cause marketing, and without proper awareness, came off as inauthentic and potentially harmful.

“Cause marketing involves the collaboration between a for-profit business and a non-profit organization for a common benefit. Cause advertising can also refer to social responsibility or charitable campaigns taken on by for-profit brands. The benefits of cause marketing strategy include brand loyalty from your customers and raised awareness for a cause”

The Black Lives Matter Movement, supporting the LGBTQ+ community, Reconciliation with Indigenous peoples, and environmental impacts are just some of the causes that are prominent in 2022. Much of the criticism directed at Pepsi was that the ad seemed to be capitalizing off the Black Lives Matter movement in order to drive sales, instead of advocating for real change. In their efforts, they missed an important part of cause marketing: working in tandem with a non-profit organization and linking this important cause to their brand.

Identifying, acknowledging, and appreciating your consumer is very important. If you are trying to attract a Gen Z demographic, then you would want to find a cause that echoes the values of that group as “69% of Gen Z is more likely to buy from a brand that contributes to a cause”. Doing proper consumer research should be one of the key foundations when planning any campaign, and especially important when approaching case marketing campaigns.

With vast information available at the tip of our fingers, it’s easy for to consumers to determine if companies are genuine in their actions, or if they're just looking to sell you something.

“Rainbow washing” has become a popular term to refer to companies who use Pride colours to indicate to consumers that they support the LGBTQ+ community but have no tangible evidence to prove they do. The company will profit off being a supposed Pride supporter but is not actionable in supporting the community in any way.

Over the past several years we have seen companies come out with specific products to be sold during Pride month. Consumers have not been happy with companies profiting off these products, mainly because most of them are just slapping a rainbow on something with no actual support to the pride community. Some are even selling the products at a higher price than the regularly packaged product.

Raising awareness by putting out a rainbow product during Pride month is not enough for consumers anymore. They expect companies to demonstrate how they are genuinely supporting the community and aren’t afraid to call out the companies who haven’t earned the right to use Pride colours.

FedEx, Amazon, AT&T and at least 20 other large US corporations can be seen rainbow- washing their socials and banners every June. These companies come across as disingenuous when their donations of over $10 million to anti-LGBTQ+ legislators were uncovered, directly contradicting their support for Pride. Not only has the CEO of Amazon personally donated to these legislators, but they are also allowing others to donate to anti-LGBTQ+ groups sell anti-LGBTQ+ items using their platform.

Pride 2022 did have some great triumphs for marketing:

Although cause marketing can be a huge downfall if not done with care, it can also be a terrific opportunity for companies to invest in real change. Gucci, Balenciaga, H&M, and Zara took real action during the height of the COVID-19 pandemic. In 2020, they announced they would utilize their facilities to produce equipment such as hospital gowns and masks, which were in a huge deficit, for healthcare workers. Although these brands may not have seen immediate results in their sales because of this, it increased brand awareness and aligned their business goals with the goals of their target audience.

Getting it Right Can Create Change and Increase Company Goals.

When approaching a cause marketing campaign, you are acting towards at least two goals: to create positive change toward a cause, and create increased business, sales, or awareness for your brand. Though it can be quite the undertaking in getting it right, when done properly, you can increase brand affinity and tangible results. A mall in Nova Scotia, Halifax Shopping Centre, recently launched “The HSC Hive” aimed at raising awareness to the dwindling bee population while working with Alveolve, an urban beekeeping company. Displays of real flowers, a “to-be-used” bee hive, and so much more was set to adorn the display from June 13 - July 31, with a rooftop hive to welcome thousands of bees.

Halifax Shopping Centre is working with a local shop, Halifax Seed, to give away 1000 packages of wildflower seeds. "Customers can stop by, pick up a package of seeds, and then take those home, plant them in their garden, and they might just see [a Halifax Shopping Centre] bee buzz on by," Stephanie Schnare, marketing director for the mall, told CBC News.

Up to 50,000 bees are estimated to visit during peak season, producing 30-60 lbs of honey which is all to be donated to Feed Nova Scotia. This campaign raises awareness for an important part of the environment and supports a local charity all the while drawing consumers into their doors.

“Customers were so interested and engaged in understanding more about the bees and why the shopping centre has welcomed them to the rooftop as well as just the role that bees play in our day-to-day life,” Schnare told CTV National News.

Brands Can Do Better 2022 and Beyond

“In North America, firms’ spending on cause marketing was about $2.14 billion in 2018—representing an annual growth rate of 4.4%.” With this spending, brands could make real change, when executed correctly, both in the awareness and loyalty of their own brands as well as toward the values that their company upholds.

According to a 2018 report “63% [of consumers] are buying goods and services from companies that reflect their personal values and beliefs.” While “62% want companies to take a stand on social, cultural, environmental and political issues close to their hearts.”

A good cause-marketing campaign comes down to working with organizations who create real change that aligns with your values and acts toward your core business goals. Figure out which organizations reflect your company values and make sure those movements will also align with your target audience to create effective campaigns that work for your brand, your audience, and your cause.