With all that that occurring in the realm of US politics in early January, we would forgive you if you missed Facebook's full page ads in the NY Times, Washington Post and The Wall Street Journal.

We will skip the surface-level irony of the fact that print ads were placed at all, if you'd like to see this PR disaster. 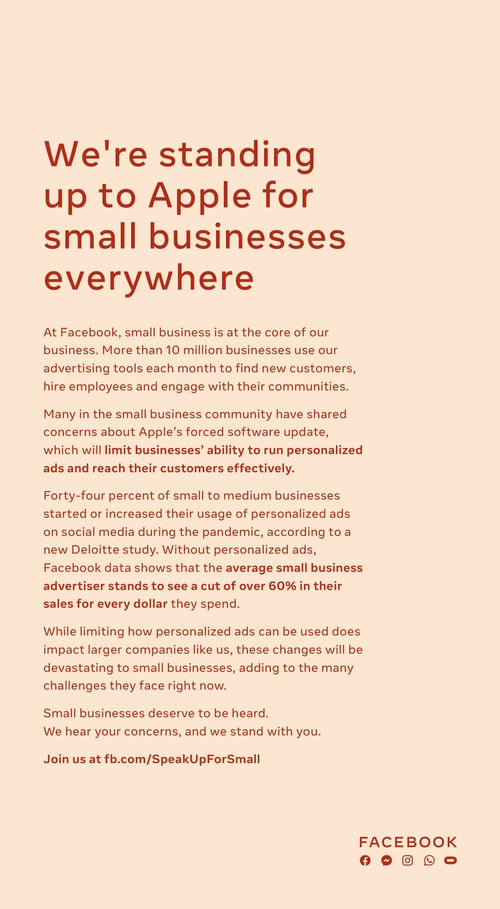 We ourselves were bombarded by emails from our team at Facebook, delivering a msg of horror to us, pointing the finger squarely at that bad guy...Apple. A consistent line emerged from Facebook.

For many, our collective reaction can be summed up with a "What?".

This isn't about you or small businesses. This is about protecting $70 billion in revenues and some $18+ billion in profits.

Apple's iOS 14 is taking a step towards enhancing privacy and consent, and potentially making Facebook's ability to collect user data via its iOS app a LOT more complicated. 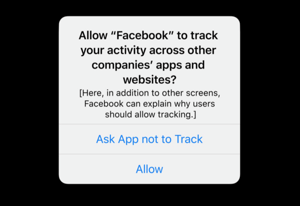 Why is Apple doing this?

Well, let's sober up a little on Apple. They are a for-profit business, and Tim Cook cares far less about your privacy than you may be led to believe.

The move from Apple, if successful, may make advertising on Facebook less effective in the months, if not years to come. A move that plays into Apple's strategy to privatize media through apps, apps that users will pay for via the App Store.

In walks Apple's narrative, "pay for this great app, and we won't bombard you with advertising."

PS - Apple kindly levies a 30% tax on the download.

So what's really at play here?

Facebook - They can see the writing on the wall; Apple is disrupting their data collection methods, which they monetize via advertisers. Should users opt out of data collection at scale, significant investment will be required by Facebook to ensure they maintain a viable advertising medium.

They are both in the business of all-out user addiction; they simply monetize them differently.

This whole situation is weird and uncomfortable because it isn't about you or I, it's about their respective bottom line.