How Digital Innovation is Reshaping CPG

The grocery landscape has been at a standstill for decades, and what leaps were made happened over longer stretches of time. The increase in forced trial and adoption for consumers in online retail has pushed the need for innovation and change within the industry at an unprecedented rate. In much the same way that individuals were driven to change their habits to digital in 2020, the CPG industry is forced to keep up with the expectations of shoppers to see omnichannel integration as stores begin to open again.

Omnichannel shoppers now account for a growing 66% of the principal grocery shopping demographic and will need to be met with omnichannel advertisements that flow naturally. A study done by Microsoft showed in 2000 that the average attention span was around 12 seconds and has now dropped to around 8 seconds with the increased stimulation and media that we consumer every day. This means that staying top-of-mind for consumers means grabbing their attention in the right place at the right time.

Ecommerce and digital offerings skyrocketed during the pandemic as brands rushed to meet consumers where they were online. Because of this, it sparked change in the CPG industry where plans for digitization that had been slow going were now accelerated. This shift will only continue as stores open back up and CPG brands create omnichannel offerings for consumers that make digital to in-store and vice versa a seamless experience.

Tell a story to your customers

More than simply having your product on the end of an aisle or at the front of the store, brick-and-mortar shoppers are going to be delighted by brands that capture their attention and tell their consumers a story. After being cooped up indoors for over a year, they are more likely to trial a product that has remained top-of-mind amid the confusion of the last year.

Tell your customer a story and take them through a journey as they purchase your product. New technologies are allowing brands to communicate in diverse ways with their audience demographics that allow them to understand your product better. For example, in-aisle kiosks may allow you to set up recipes that include your product. This will allow your brand to stand out as consumers are taken through a journey of how your brand can easily fit into their life. You will be able to show them the possibilities of your product in a way they might not have considered. Progressive Grocer quoted that “Kiosks provide a competitive advantage and are an effective tool in branding efforts targeting the modern connected consumer. Offering customers everything from convenience to personalization, kiosks maximize the patron’s experience while delivering steady opportunities for a brand or retailer’s return on investment.”

It's clear that digitization is coming to stores and that it will not only create ease for the patrons, but for savvy marketers looking for another unique and tailored way of interacting with their consumers.

Canadian Grocer reports that “Walmart plans to sell more ads to brands on checkout and display screens, and add more screens to the in-store experience.” This will allow brands to serve ads to shoppers as they wait for their prescription at the pharmacy or their meats at the deli. Large grocery chains like Loblaws have also invested in their media businesses in the past few years with plans to accelerate the offerings for advertisers in-store.

According to an in-store shopper engagement study that interviewed 3,000 mass merchant shoppers revealed that "82% of purchasing decisions are made while in a store, 62% of shoppers make an impulse buy while shopping, and 16% of unplanned purchases are driven by in-store promotions." This shows that this segment, while enjoying the brands they know and love, can be directed to trying new products directly while they are shopping in-store.

As CPG retailers have been forced to adjust quickly to a digital environment, those elements are going to integrate themselves slowly into physical stores in the next few years. Brands that prepare themselves for advertisements that can be placed in aisle kiosks or screens in-store will be ready for the next stage of digital integration in CPG. 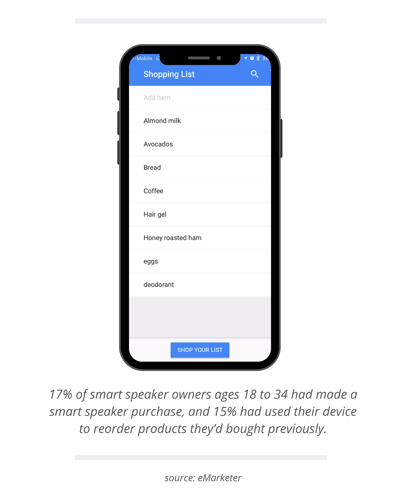 The move to digital

Understanding the audience and when they are driven to make CPG purchase decisions as a whole is a good first step. For Christmas 2020, Google analyzed the activity of individuals through Google Maps to read where and when individuals were spending their time and found that Saturday is the most popular grocery shopping day, particularly between 1:00-3:00pm. This would mean that households are likely putting the finishing touches on their shopping lists on Friday night and Saturday morning and more susceptible to product ads at this time.

This is data that is changing with the ease of online shopping. Grocery apps and audio-based grocery lists through Google Home of Amazon Alexa can be made through the week, prompted by needs as they come up. Advertising on grocery apps and through popular apps on home audio devices will increasingly important to capture the attention of your customers.

If a user shouts, “OK Google, add orange juice to my shopping cart”, you want to make sure your brand is the default. Much like a higher search ranking on Google, you want your product to be visible to all parts of the internet as the premium option. As audio and voice becomes more prominent in the next few years, optimizing your business ahead of time will help increase your ROI. According to eMarketer, “17% of smart speaker owners ages 18 to 34 had made a smart speaker purchase, and 15% had used their device to reorder products they’d bought previously.” This number is expected to increase as voice becomes integrated as an option for low-touch environments over the next few years.

Much like staying on top of the changes in-store, digital environments are expected to continue the rapid acceleration of innovation we've seen in the last year. Advertisers will need to continue to look ahead for the new media that is delighting consumers and create an approach that feels personalized online while being mindful of new privacy measures.

The omnichannel CPG shopper will be the main target for advertisers in 2021 and beyond. Incorporating both the brick-and-mortar and online move to digital, the omnichannel experience will become the new normal for advertisers. As our example mentioned above, kiosks in-store may allow you to show grocery store patrons a recipe that goes with your product, but the omnichannel experience can take this further by allowing an individual to take the in-store offering home with them. With technology like QR codes, one could transfer the recipe on their phone, or attach that code to a mobile game that allows them to make the recipe digitally for a coupon.

QR codes started to popularize once again during the pandemic as they become a personalized kiosk for wherever you visit. In restaurants, they become a contactless menu, at an event they can become your check-in form, and at the grocery store they can be your seamless transition into omnichannel shopping. A study by QR Tiger found that, “the 24-54 age group has the most interaction with QR codes with the 34-44 bracket representing the most users at 27%.” Though all age demographics had increased usage over the last year and are expected to continue increasing.

Technology that we see integrated in retail shopping (like the QR usage in Burberry China, Zara's AR stores, and Audi's VR showroom) has started making it's way into the CPG industry. These experiences bridge the gap between digital and physical spaces to delight the omnichannel shopper.

One of the best examples of this innovation in the CPG space is in Amazon Fresh and Amazon Go stores. As of March 11th, there are 11 Amazon Fresh stores in the US with plans for at least 28 more in the near future. These stores feature the Amazon Dash Cart which uses the cart to act as a self checkout, scanning the items as they are placed in. The Amazon Go stores use tracking technology to allow individuals to grab and go, being charged automatically as they leave the store. Both offer Amazon Alexa in the aisles as an assistant for finding or ordering items and to increase affinity for voice powered purchases in the future.

It is clear that the CPG industry is moving toward a digital approach both in-sore and online and the future of advertising lives in an omnichannel approach. Advertisers will delight consumers by keeping on top of their movements and desires and telling them compelling stories across all mediums. Creating compelling advertisements and strategies in a cross-channel approach will increase brand equity and market share and move brands closer to an omnichannel experience.