The History of Boycotts

In this blog you will find:

The July boycott of Facebook by some major national and international brands was unusual in many ways – mostly because it was centered around hundreds of businesses withholding marketing dollars from a platform rather than individual consumers choosing to change their buying habits or behaviour.

Stop Hate for Profit is working to hold Facebook to account for “promoting hate, bigotry, racism, antisemitism and violence”. The organization, backed by several civil rights groups, has put pressure on brands who seek to sustain high ethical standards to publicly pull their ads from the platform in July 2020. This action has, in turn, put pressure on many brands – especially those who have had spotty records around race (ex. Starbucks and Pepsi) - to follow suit. While over 1000 brands signed on, countless others have quietly cut their spend on the platform.

Together, the top 100 organizations boycotting have withdrawn their advertising dollars valued at 6% of Facebook’s overall ad revenue – and possibly beyond – until the platform’s policies are improved.

Mark Zuckerburg and Facebook have a lot to answer for when it comes to stamping out hate speech on their platform (and for protecting democracies from elections tampering by foreign interests, for that matter).

Did the boycott have an impact? Near the beginning the pressure had some results, causing Mr. Zuckerburg to ‘scramble’ to announce new policies (though in private, he’s said to have stated that Facebook is “not gonna change”). Will this effort last? Well, that depends.

History can teach us a bit about this boycott’s likelihood of impacting the social media Goliath.

A name in infamy…

Captain Charles Cunningham Boycott was a British land agent working for a land owner in Ireland in 1880. His tenants ostensibly had a work strike – and refused to work in his fields and stables due to what they perceived as unfair treatment during a poor harvest year. Local businesses refused to trade with him (some, according to Capt. Boycott, complied under the threat of murder). And, just like that “to boycott” appeared as a verb. In 1880, the term became synonymous with avoiding something as a statement of your lack of support - and was adopted with regularity in the international media. 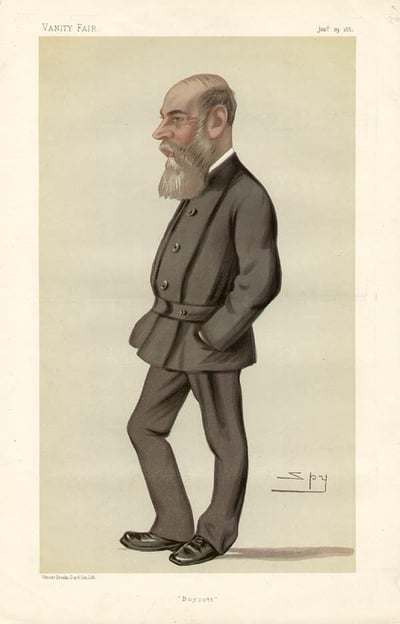 This event had all three of the major components required for an effective boycott:

And it was successful by many measures. Truthfully, it’s unclear if the tenants got all that they were demanding, as Boycott brought in guarded scab workers to fill his labour deficit. That said, ‘boycotting’ continued to be a common tool for the peasants in Ireland. The event ruined Boycott’s reputation and he left Ireland that year. Perhaps most tangibly, this mother of all boycotts effectively hit the bottom line of the business owner. It cost him “at least £10,000 to harvest about £500 worth of crops”.

The range of potential outcomes

For activists, boycotts continue to be used extensively today – with varying degrees of success.

Micro boycotts (“I’ll never shop there again”) and macro boycotts (“Let’s all never shop there again”) occur daily. Some are organized and sustained by dedicated lobby groups (like the long-term efforts of PETA against KFC) and some are not. Many successful boycotts feature a passionate celebrity who extends the voice of the initiative (like Allyssa Milano’s efforts to pressure businesses to cut ties with the NRA) and many don’t.

Successful boycotts have the same three factors that were used against Captain Boycott: A clear objective, sustained and collective effort, and lots and lots of press. That final item – press and heightened public awareness – is often considered a mark of success in and of itself. It is essential to achieve any other objective.

In an interview with the Los Angeles Times, Maurice Schweitzer, a professor of operations and information management at the Wharton School at the University of Pennsylvania was quoted as saying:

“Boycotts are rarely the precipitating factor for change. Rather, they bring attention to an issue and signal the magnitude and intensity with which a group feels a particular way. In most cases, a small minority of people call for a boycott that the wider community fails to support by taking substantive action.”

Data on the efficacy of boycotts is sparse mostly because their intended outcomes are often unclear or hard to measure. There are, however, a few studies to consider. A report in 1986 showed that many brands saw short term revenue or brand value decline. In 2011, a study found that every day a company’s boycott was in the news, its stock market price declined. Another study showed that only about ¼ of boycotts lead to tangible changes by brands.

As noted above, being successful in a boycott relies mostly on one factor: Damaging a brand through formal or informal media coverage. Levels of coverage can vary significantly (from a social media post being shared repeatedly) to being picked up on national news. But, studies have shown that without sustained media coverage, nothing much happens.

The hierarchy of success could be said to look something like this: 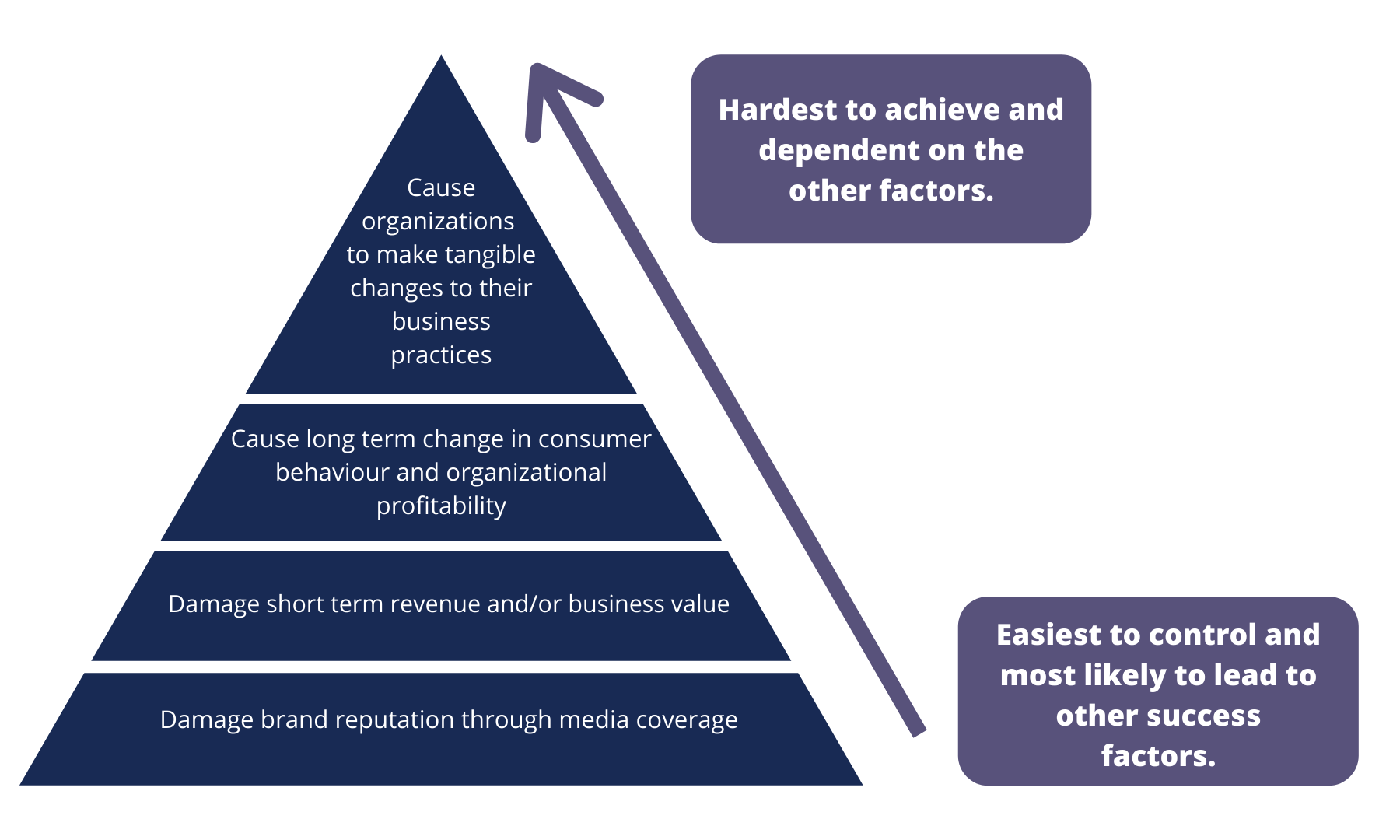 The general consensus is that very few boycotts have led to change mostly because they lack a sustained effort and/or consumers displayed outrage on social media but did not change their behaviour in the real world. While sales and stock prices often dip for organizations who are at the center of a boycott, most brands recover and don’t make tangible changes. They’re often advised to just “wait it out”.

Mark Zuckerberg appears to be making a few concessions, but mostly, he’s been riding the wave.

When we put a pressure test on the boycott itself, the critical component of ongoing media coverage is waning. The absence of an ad on Facebook is not enormously noticeable to consumers – so the public (and media) eye has wandered.

Sustained commitment to the effort is now in question. Politico summarized the current situation very well:

“Analysts likewise say Facebook can weather the storm; most of its ads come from small and medium-size buyers, not the large corporations making boycott headlines, and Bloomberg researchers predicted Monday that the boycotts could cost Facebook only $250 million in ad sales — a sliver of the company’s $77 billion in annual revenue.”

So, this initiative is making a dent, but it won’t change Facebook on its own.

That said, brands staging a boycott is less common the consumer-focused alternative. And it should happen more often. Brands who understand their true purpose and core, organizational beliefs need to act as good corporate citizens whether through this boycott or other initiatives. They ought to be loud and proud about their reasons and their specific demands. They ought to look inwards as well to continuously improve their organizations’ practices to impact their broader community, from Facebook and beyond. Consumers want to see leadership from brands and it will, in turn, drive brand loyalty.

As we’ve seen in simultaneous B2B boycotts of sponsorship to some professional sports teams, this approach can be effective where lobby groups have failed. Change can happen through this form of sustained effort.

From Mr. Zuckerburg’s perspective, he’s right. For as long as Facebook and Instagram see penetration rates of 95% and 65% respectively for consumers aged 25 – 54 (according to ComScore) – most advertisers will come back. Hopefully the platform will have changed for the better in the meantime.

On July 30, 2020 Facebook announced its Q2 earnings to find that they had a growth of 11% year-over-year. The earnings for Q3 (in which the numbers for the July boycott would show) are anticipated at a 10% year-over-year growth which Business Insider remarks "It's less than the bumper growth Facebook has enjoyed in some previous years — but demonstrates that the ad boycott is not a grievous wound to the company." The Facebook boycotts have perhaps fallen short on one or more of the initiatives behind a successful campaign.

Captain Boycott left Ireland in infamy due to international press and incessant pressure from all angles. Mark Zuckerburg has made an absolute fortune by building a platform (“not a publisher”) that performs the way it does. While he’s often professed to be an ardent protector of free speech, he is now showing cracks that he might acknowledge the platform’s role (and accountability) in spreading hate or false information. Until he’s truly pushed on all sides - by funding, public opinion, and platform usage - to behave differently, we’ll likely only see marginal changes in their policies. For change to occur, pressure must continue through this and other initiatives – and lots and lots of press.