Tourism Marketing Do's when Tourism is a Don't

On February 11th of 2020, we wrote a POV for one of our tourism clients on the potential impacts of a Pandemic. “There’s a remote possibility”, we advised, that borders may be closed or that individual provinces will restrict travel.

We noted that Hong Kong, Australia, and the US had closed their borders to China. We also cited research from previous outbreaks - most recently SARS and its impact on effected regions in Asia, Mexico, and Toronto. We said that North Americans would be “more likely” to stay closer to home over their summer breaks – and look for destinations that were less populated or familiar.

Upon writing that email, and hitting send, I felt alarmist and a bit embarrassed by what seemed quite fatalistic. I joked that I was Chicken Little. A Debbie Downer.

We met with that tourism client, in person, on March 12 – awkwardly laughing as we agreed not to shake hands, but instead we tapped toes, getting used to the concept of physical distancing. (The 20 of us then sat shoulder-to-shoulder around a large conference room table).

Things moved very quickly from there. My son was sent home from daycare 5 days later (not to return until September), our physical offices closed at Time + Space, Canada stopped entry from all but the US in mid-march and then closed the border to the United States on March 21st.  Here in Nova Scotia, things have been really quite good, comparatively. Still, our family didn’t travel more than a few kilometers away from our home for months – and when we did, it’s only been within the (glorious) Atlantic Bubble.

But long-distance tourism was more or less halted across the world.  Our long-term tourism contracts were paused.

This scenario was repeated thousands and thousands of times as destination marketing organization, accommodations suppliers, event managers, restaurants, and airlines watched their projected revenue dry up in a matter of weeks.

The United Nations World Tourism Organization suggests that international tourism declined about 70% YOY in the first 8 months of 2020 (and that includes a few “decent” months in January and February).

For those who were not in full lock down, and when we were between ‘waves’, people explored places closer to home and spent much more time off the beaten track. According to Deloitte, footfall traffic at parks has been up extraordinarily compared to previous years (graph below). Tourists just wanted to find a change of scenery and a breath of fresh air. 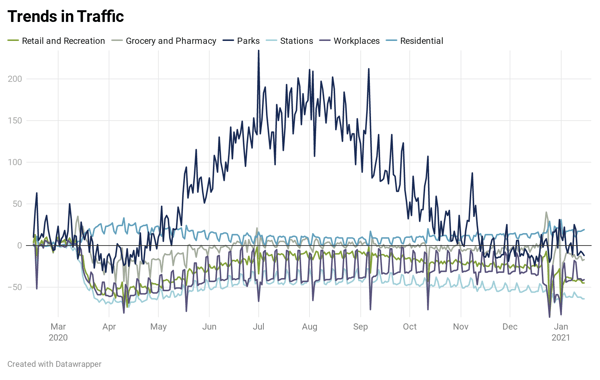 Destination marketers were faced with some extremely hard times and decisions. What do you cut? When? How do you pivot?

Most often, the decision was: cut costs now.  While advertisers in almost every sector cut their spend, none did it as much as the tourism and travel related industry. At this point, there’s predictions that it’ll mildly rebound in 2021, but it won’t be normalized until 2022 (or beyond) as cash strapped tourism brands and businesses seek to be extremely efficient in their spending.

This chart suggests (rightly) that some Tourism marketers DID do SOME advertising in 2020. They took a few different approaches:

Get the locals out

When borders closed, targeting locals worked to stem some of the losses – and gave locals the ability to discover what their own cities and regions had to offer. Destination Canada, the organization who’s mandate is to drive international tourism to Canada, prioritized domestic travel and encouraged Regional and provincial DMOs to do the same. This trend was seen worldwide as trapped locals made the best of it and experienced their own region.  Packages and small campaigns within reasonable boundaries were offered.

Interestingly, when talking to locals, what you emphasize and how you communicate can be quite different to what you might say to someone who’s unfamiliar with your destination. Explanations were lessened – and a call-to-action for something familiar was much easier. Brands got more to the point and didn’t much bother with building awareness or desire with their own (captive) populace.

This was notable in how Great Britain handled their advertising. They connected with locals (who’ve been in intermittent lock down since March) with familiar tools like pub quizzes, recipes, and playlists. They also employ UGC (likely keep costs low) and share some of the more unique locations that only locals know about.

For those destinations who saw their hard-won bookings canceled, many supported official messaging and encouraging people “from away” to stay away. The common theme of “stay safe and don’t come now; we’ll be here for you later” was seen the world over.

On the Beach (a UK travel booking site) did a great partnership with Iggy Pop, showing brits enjoying themselves at a future beach vacation – while running, in bathing suits, in slow motion...  It’ll transfix you.

Expedia (who had a horrifying 82% YOY drop in revenues in Q2) showed how you can keep imagining your next vacation, from your living room. Visually appealing, they are distinctly showing that the tool can be used for planning – without appearing to be encouraging travel- and they’re banking on a recovery in late 2021 and beyond.

And then there were some destinations who found ways to build awareness, familiarity, and desire in order to get on that bucket list. I’ll admit – I’m a sucker for this work. It took real confidence and a belief in their strategy and their role in the consumer journey. In theory, if you know that a location can stay on someone’s bucket list for up to 20 years before it’s visited, then this year is as good as any to advertise.

Iceland is a great case in point.  A perennial innovator in tourism (extending their advertising to product development and significant analytical review), Iceland advertises with swagger. They are unapologetically different, and in this case they built a campaign that shows they understand how their target feels – and how Iceland is the elixir even before someone is able to visit.

They started with a campaign in the summer built on the premise that “it looks like you need to let it out”. Give it a watch – it’s good.

They then provided an outlet for those who can’t visit (ex. their borders are closed to the US) or shouldn’t visit (everyone) with the JoyScroll app. The concept is simple.  According to the ad, we ‘doom scroll’ 22.7 meters of negative news on average per day on our phones. Iceland offers the same... err... length of positive or joyous imagery to counteract the negativity. Pushed through social media, the concept is not especially expensive, but smart, sweet, and compelling. It also shows they understand what might drive a target to consider Iceland as their next destination of choice.

It’s really just a tourism reel -  waterfalls, whale watching, hiking, dining, fjords – but it’s one you want to watch. Give it a go.  Enjoy the Joyscroll here.

Over the past year, humans have been locked down; not all at once, and not all in the same way. We’ve found ways to cope and survive, but pandemic fatigue is real.  As we look out our windows and outside our bubbles, the average Canadian is starting to consider what we might do when the restrictions lift. There’s hope. New data published through AFAR (sourced from Kayak) last week showed that 66% of Americans want to travel in 2021, but only 11% have booked a summer vacation.

Once the pandemic is controlled and the vaccinations have been widely distributed (which, admittedly, does feel a long way off yet), people will be looking for an escape. There will be those who want to hit up Vegas or raves in Berlin. More people than usual will be looking to find a bit of open space and a significant change of scenery - hopefully, come Q3 and Q4 of 2021 and beyond. Destination brands will need to be poised to tap into that pent up demand.