Vertical competition might be one of the most significant and disruptive forces in today’s modern business as traditional boundaries and limitations are all but eliminated for most industries. Companies that are strategically positioned close to the end consumer/customer are in the driver's seat, having the ability to look vertically within a chain and find areas of natural extension. Alphabet, Amazon, Microsoft, Facebook, and even the Irving’s have perfected this approach, growing both their value, market share, and their relationship with the end consumer.

Scott Brinker, of Chiefmartec.com fame who’s now with HubSpot, outlines the digital marketing ecosystem in the illustration below. You can see how dominant Alphabet and Amazon have become. 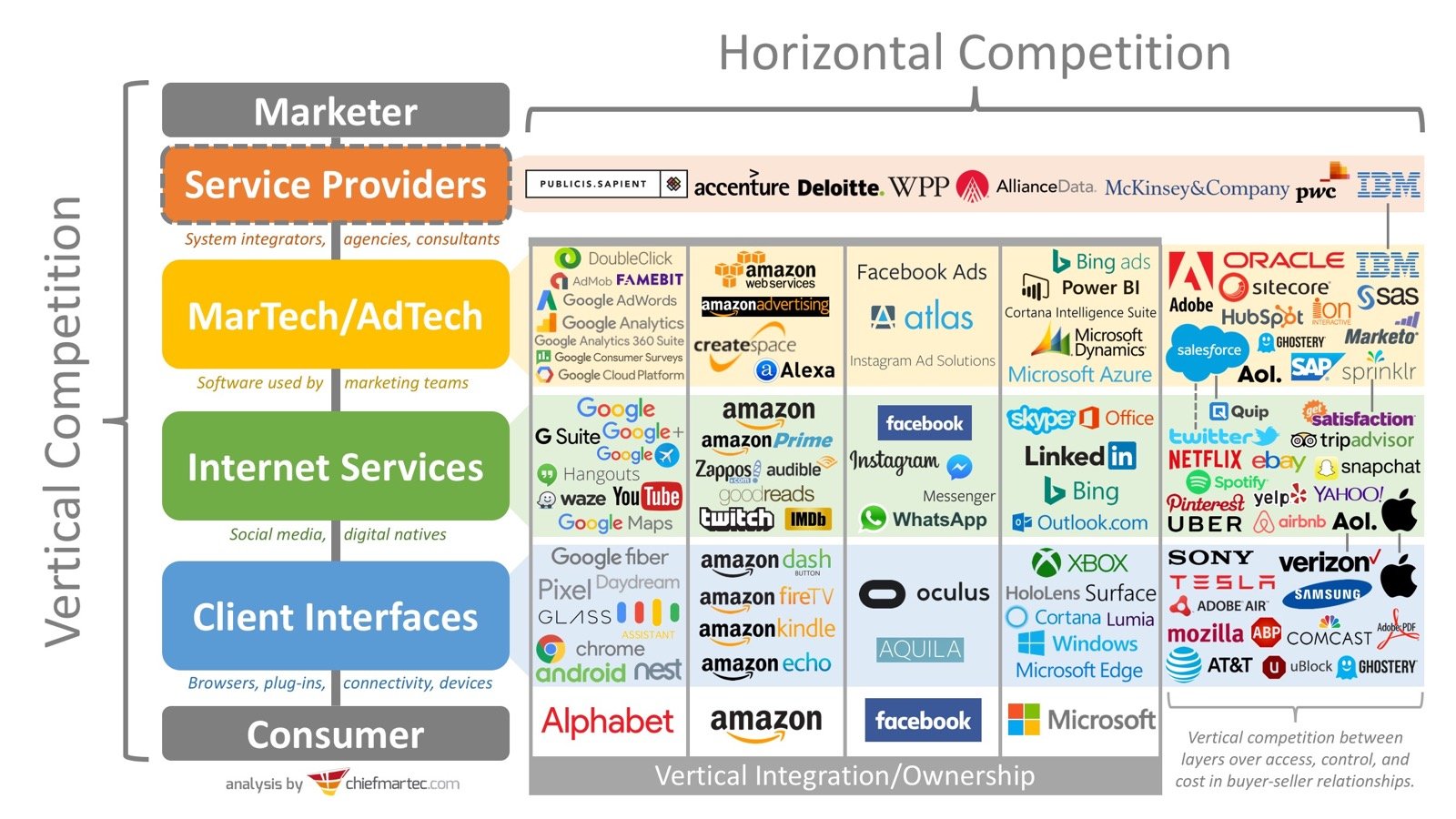 It’s not hard to see why these companies perform so well on the market. As they acquire a larger slice of the pie, they ultimately reap the rewards:

Microsoft is a very interesting example of vertical competition in that they have seen massive success, followed by failure, and have ultimately experienced a return to glory. The brand established desktop OS dominance in the 90’s, essentially staking their claim to the future of business. If you were looking to run an operating system on a PC, you had few alternatives to choose from. As a rule of thumb, the fewer alternatives that exist in the chain above or below you, the stronger you are as vertical competitor. This allowed MSFT to dominate back office elements such as business intelligence, email providers, internal communications, etc. in addition to front of house elements like mobile, entertainment, communication, and social networking.

If you find yourself in a situation where you are faced with a strong vertical competitor, all is not lost. Here are a few steps you can take to protect your market position:

Innovate – When it comes to competitors, speed matters. Investing in innovation now is critical to stay ahead.

Execute Quickly – Quick implementation is vital. Moving too slow will allow competitors to capture the opportunity, re-imagine what the customer experience should be, and ultimately evaporate your market. If you’re looking for an example of this, look no further than BlackBerry. They dominated the smartphone market globally just a few years ago but didn’t innovate, were relatively slow to market compared to their competitors, and failed to take any massive risks. Apple all but obliterated their brand with the launch of the iPhone, moving the goalpost for what consumers believe that device should be.

Take Calculated Risks – Alphabet, MSFT and, to less of an extent, Amazon have all experienced failures (think Google Glass). But the one common theme among them all is that the bets that have paid off have been huge. For example, Amazon Web Service has roughly 33% of the global cloud infrastructure, a full 2.5X more than their closest competitors who, ironically, are MSFT, IBM, Google and Alibaba.

Fight Back – When competition exists, it is critical to secure your market position with a strong statement that tells your customer you value their business and you are the best option for their investment. A heavy marketing push can help secure share and, in many cases, increase your share by eliminating the notion of substitute products. Not dissimilar to the notion of pushing harder on marketing during a recession, if you can prevent an erosion of market share in the face of competition you will emerge stronger in the end.

If you are moving into a new space the same rules would apply, although we would argue that solidifying the customer relationship in the areas you own today in advance is critical. Apple did this in advance of moving into the mobile phone market, and this strategy worked amazingly well for them. We would then recommend a significant “fight” strategy with promotion to let the consumer/client know you are the best option and your ownership of a bigger portion of the chain is only logical and ultimately benefits them (which in many cases it may).

Facing off with vertical competitors can be intimidating but it doesn’t have to be a death sentence for your company. With a solid strategy, you can minimize vertical disruptions, protect your market position, and perhaps even gain ownership of a bigger portion of the chain.

Want to know more about how to disrupt your vertical disruptor? Drop us a line!