How Has COVID-19 Impacted TV?

In the Blog you will find:

Picture this: its 1922 and you’re relaxing with your family and listening to the radio in your Montreal home. CNCF radio gives you the entertainment and content you need for the day, but today they mention that you should go and check out the local record store and suddenly that’s what you want to do. This was the first known intentional media advertising done in Canada according to the Canadian Communication Foundation. “Darby Coats recalled going down to the local record store to "borrow" a phonograph and some records. In return, he promised the store a mention on the air, and the first commercial was broadcast.” After this, other radio stations followed suit by collecting favors, gifts, and money to run commercials from local businesses on air.

With Television growing in popularity in Canada in the 1950’s, advertisements were a large part of the growth of this new form of media, giving businesses the extra level of visual to appeal to their customers. The popularization of the computer and the invention of the internet followed suit near the turn of the century as a new way for consumers to find information on businesses and opened media up on a global scale.

In the last twenty years, the emergence of new media from the internet and digital innovation’s on things like social media, video games, virtual reality, etc. have given consumers more places to go to consume content and advertisers more places to reach their consumer base.

The emergence of the Coronavirus pandemic in 2020 forced broadcasters, advertisers, and consumers to re-think their usage of both traditional and new media.

The Call to Action

Media across the board had to rethink their strategies on appealing to their audience but this was particularly evident on traditional mediums (television, radio, and print). Businesses that were advertising on these outlets had to re-structure their creatives to reflect not only the sentiment of the time, but also to drive that call of action not to in-person sales as they largely had been, but to a form of new media such as a website or online store. According to MediaVillage “Between March to April 2020, brands that ran COVID-19-related creatives saw an average lift of +37%, while those that did not only saw +13% lift.” Agencies and marketing teams needed to be quick in changing the ways they interacted with consumers.

After the initial scramble to switch creative sentiment in advertising, companies began to look at the changes that were arising in the habits of consumers and trying to match what they desired. What is it consumers wanted? Content, content, and more content.

Being stuck at home meant time otherwise spent commuting or in lunch meetings could now be used to catch up on the newest trendy show. For those stuck at home with children, content was craved for helping with schooling or keeping kids occupied when their parents were on a video call.

In the height of the pandemic wave, April 2020, Canadians were consuming more entertainment than they had been the previous year. Compared to April 2019, all TV tuning grew 8% while daytime grew by 17%. This rise of content was even more significant in digital with video streaming minutes increasing by 52.7% and digital news site visits increasing by 73.4%.

While the News is the most popular segment across the board, consumers desperate for information, content channels are experiencing growth on all sides to accommodate the increased need for entertainment. Though many advertisers pulled messaging and advertising spend as the pandemic began, this increased desire for content and services was a drive for change to many companies marketing efforts.

As consumers suddenly had the time to watch more and more content, it meant they also craved and had the time to purchase some of the things they were being advertised on TV. The problem with this arose that many of the companies that were advertising not only had to change their creatives to be situationally sensitive but to direct people to digital spaces.

It is no longer acceptable not to have a website but through the pandemic it became increasingly evident that spaces like social media were also a good pull for not only marketing efforts but sales as well. Facebook’s platforms, including Instagram, launched their stores ability to buy directly through the social platform, no longer having to leave the site to make a purchase from a retailer. This meant that those who had been advertising on traditional media could more easily transition to digital shops without building a new website to direct customers to.

Before this, advertisements on broadcasting platforms like TV and radio could direct their customers to an in-store purchase but now they must use a secondary piece of new media to engage with consumers.On top of this, because ad spend had been halted for so many companies and continues to be an issue across the globe, broadcasters are scrambling to change policies on booking and cancelling ad spots for the Fall, one of the biggest changes the industry has seen in years.

A Case Study in Sports

This was a big hit for everyone. Sports...cancelled? And though the devastation was evident to fans across the globe as they lost a much beloved hobby, to the TV industry, this was a huge hit to their advertising income and entertainment output. “Nearly every sporting event, major and minor, has been canceled, moved or postponed because of the coronavirus pandemic. The LATimes comments that because of these changes, the TV industry could lose more than $10 Billion in advertising in the first half of the year alone.

Those who have invested ad money in sports marketing have had to switch up their approach and put that money elsewhere. “Some brands may also look for ways to continue to engage sports fans, such as via social media or esports.” To target the same audience, advertisers have adapted to bring their creative marketing to New Media platforms to reach their target demographics. Even members of traditional sports have tried their hand at a digital transformation as seen with racing drivers taking on virtual races to pass the time and keep their minds agile and further driving notice to esports as more than a fun game.

As of July 2020, in-person sports, whether with or without in-person fans, have made movements toward re-starting their seasons. And while many will switch their budgets back to traditional sports games, being forced to look elsewhere has given advertisers a unique opportunity of reaching their demographics in new ways. Those who may have hesitated in the past to enter the esports industry and use new media as an outlet for their advertising are now considering the positive outcomes.

Will New Media be the New Norm?

With TV advertisers scrambling at the beginning of the pandemic to find new ways to reach their audience and opening their possibilities of where they put ad spend, will they turn back to traditional broadcasters when the crisis is over? 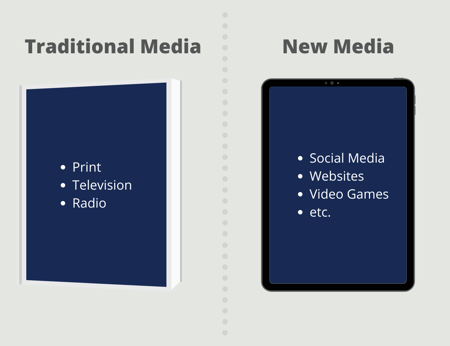 One of the industries positively impacted by the pandemic was the streaming (OTT) services. Jefferies analyst, Alex Giaimo told Marketwatch that “A survey of 1,500 Netflix customers shows their engagement has increased “significantly” since the COVID-19 outbreak. The percentage of subscribers in the U.S. viewing the service for more than 10 hours a week has soared to 38% from 16% pre-COVID-19.” And though it could seem like the rise of streaming and digital media may see to the end of traditional media, we do not think this will be the case.

According to Comscore, the total minutes on social media in April 2020 was up 72.1% from 2019 and up 52.7% on streaming services. Clearly, digital services are increasing their viewership and advertisers are taking advantage of this as IAB states that “Buyers expect [ad spend] to be up 13% in 2H vs 2019”. And while viewership on traditional platforms seems to be increasing, IAB expects ad spend to flatline for Q3 and be down in Q4.

However, each platform brings something different to the consumer, new media only opens the possibilities of where your target demographics may be. The pandemic has caused a shift of perspective; companies who may have been nervous about breaking into digital spaces are now considering the opportunities they may bring for their business objectives.

Muti-media platforms like the Connected TV (CTV), which allows users to connect their TV to the internet and browse both the traditional linear TV broadcasting as well as apps for things like OTT services and online video, will bridge some of those gaps. TV watchers will not simply choose one thing over the other and the pandemic has caused people to jump out and try new things and new ways of getting their content.

What Can You Do?

If your company had your advertising budget in mediums that were inaccessible during the pandemic, take the opportunity to do what consumers are doing and try something new. Calculate where your viewers are and where they might seek new content in the future. If this seems daunting, check out our services to see how we can help.